How to play:
Just drag and drop your hero card onto one of the three card cards in front of him.
Your hero can only move on the cards with which he is in contact.
The game is lost if your hero's health is reduced to 0.

There are different types of cards:

Notes:
Notes : The game is available in English and French.

this should be a steam game by now right? its that good i can only think about whats to come of this game

great game I love it pls. make a proper reease with more content

Fantastic concept. A post-apocalyptic theme would be pretty amazing as well.

This game is brilliant. Simple but engaging gameplay and beautiful pixel art

Oh boy this is so much fun!

This is awesome. It would be good game for mobile devices. Please, keep making games!

Nice game. I want it on my android phone)

Excellent concept ! I love it. I wish this game had more depth like a story and more stage, I'd buy that.

this was a great game, thanks for making it

Very enjoyable, I find that it takes the best elements of the roguelike genre and translates them into an easy format that is great for killing time with a bit of thought.

The pixel art on the monsters is great, however gameplay-wise I think they stop being a major threat once a player gets used to finding the optimal path, unless they are stacked one after another which can be a russian roulette given the player's  status at the moment. I understand that this is a major part of the roguelike experience but as laikaproj suggested, a big improvement can be made if for example, attacking monsters yields extra gold or loot drops. Otherwise, it becomes pretty straightforward to choose the path of least resistance and stacking monsters feels gimmicky.

I really like the variety in the items you can find but found that the engine tended to repeat a lot of the same items on a single run. Also a mobile version, especially offline would be a mainstay on my phone!

Solid 4/5, opened up the whole genre for me!

The artwork is beautiful, mechanics are elegant, and filesize is excellent. I second the mobile suggestion!

This would be a incredible mobile game! Artwork is beautiful and mechanics are simple enough for mobile.

One comment on game design: would like to see some reason to actively attack monsters. The choice between attacking something a monster or taking gold or health seems trivial since they don't really do anything but lower your HP.

Nice game in fact. Btw what engine you use for your games?

perhaps a custom run option after you unlock all 4 characters, where you can pick the stuff you start with?

Fell in love with the game. The beauty here lies in the simplicity. It also has great game feel.

Beautiful game! It would be great to have it also mobile (now it has problems on screen size and with touch interface

This is an awesome game.  Thanks for sharing it with us.

What development tools did you use to build this?  And is it all done in HTML5?

This is a bad clone of Card Crawl.

It would be very nice to directly play it in chrome on android :) is it much to do?

Ah I see. It works on Mozilla Firefox though (without the status field)! Nice work again :)

it has potential. you win easily when you get used to it tho,

Reply
Loki Nighton1 year ago(+1)
I wasn't expecting much as I didn't see how this format might work but this rogue like - card game mashup is absolutely aces! <3

This is a really great game. The art style, items, art, everything. However, I urge you to change the gold mechanic. I urge you to add a SHOPS  (and perhaps make the game slightly harder accordingly), and have the characters unlock in some different way. That would make the game MUCH MUCH better and will actually give gold stakes, not to mention having the lizard character actually be meaningful.

Excellent game.  There are so many possibilities here.  I look forward to future content

This really is a great game, good work and thank's for sharing that with us :D

Oh my god, I LOVE IT! It is so much fun. Is there any android build? 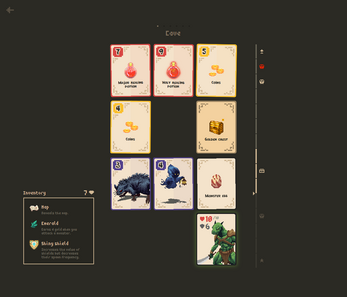 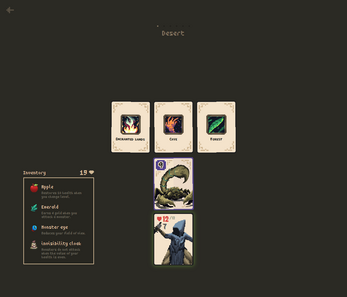 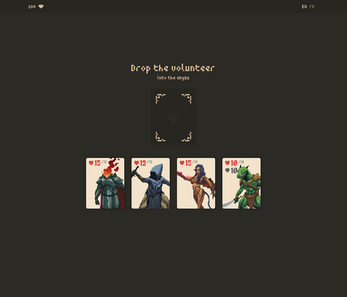 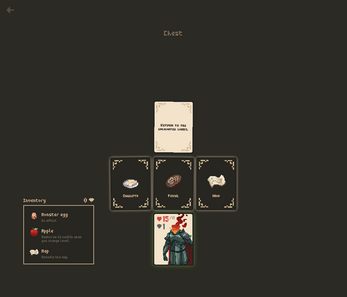 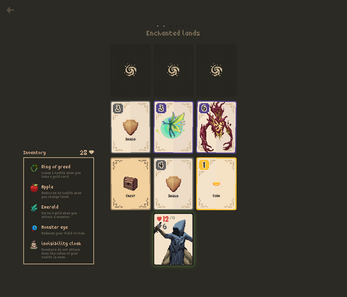